Home/Latest from John Fleetwood/Solar Energy Grows Up
Previous Next

When subsidies for renewable energy projects were removed, the government was accused of acting against their climate change commitments.  Yet in recent years, the cost of both wind and solar energy has fallen dramatically.

Fall in costs of solar and wind energy since 2010. Source: BloombergNEF May 2019

Since 2010, the cost of solar energy in particular has fallen to the extent that it is now competitive without subsidies.  The evidence of this can be found in the Positive Pennine Portfolios, where holding, NextEnergy Solar, is developing its first subsidy free solar projects.

Instead of being reliant on government subsidies, these projects will derive all of their income from the market price of energy generated.  It’s interesting to note that NextEnergy believe that this is the most profitable way of developing their portfolio, although they are also extending the life of existing solar assets.

Over the five years since the fund was launched, the NextEnergy Solar Fund has achieved an annualised ordinary shareholder total return of 9.5% in line with or in excess of the target range of 7% – 9%  return for investors based on the launch price (Source: NextEnergy Solar Annual Report 31 March 2019). 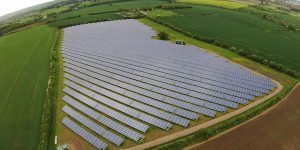 If investing in this manner is something that you think your clients would be interested in or you would like more information about the Positive Pennine range of Portfolios, please contact Sean Fisher who would be happy to provided all the information you will need.  To contact Sean you can either call him on 07583 241668 or e-mail

These are the views of John Fleetwood and do not necessarily represent the views of Positive Pennine. Investors should remember that the value of investments, and the income from them, can go down as well as up. Investors may not recover what they invest. Past performance is no guarantee of future results. Any mention of specific security should not be interpreted as a solicitation to buy or sell specific security.

World Environment Day – What’s it all about, and how can the way we invest money make a difference?

Investing in the Transition to a Low Carbon World

So, what is Earth Overshoot Day?

Add your details to receive our Newsletter